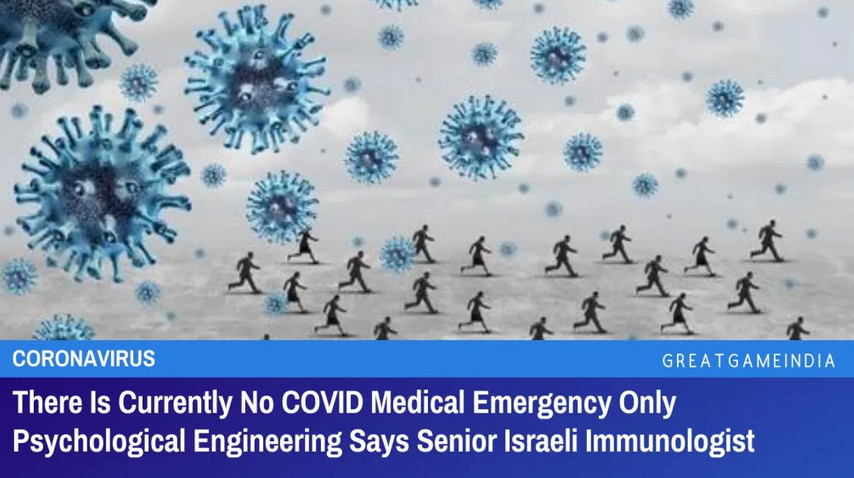 The attempts of governments across the globe at “psychological engineering” the population on Covid related matters has now been fully exposed after several years. A well respected immunologist in Israel heavily criticized the approach of every administration globally.

In a scathing letter addressed to the Israeli Ministry of Health, a renowned immunologist denounced mass vaccination against COVID-19 and chastised officials who’ve already “branded” the unvaccinated “as spreaders of the disease.”

The letter, penned by Professor Ehud Qimron, who is the head of Tel Aviv University’s Department of Microbiology and Immunology, rips off vaccine-focused COVID tactics endorsed by authorities across the globe, which Qimron labels “doomed to fail.”

“Two years late, you finally realize that a respiratory virus cannot be defeated and that any such attempt is doomed to fail,” he wrote to the Israeli health ministry. “You do not admit it, because you have admitted almost no mistake in the last two years, but in retrospect it is clear that you have failed miserably in almost all of your actions, and even the media is already having a hard time covering your shame.”

Qimron reprimanded Israeli authorities for failing to recognize that COVID-19 vaccines will neither eliminate the virus or provide herd immunity, as the government’s immunization campaign “failed” to do.

“You refused to admit that the vaccinated are contagious despite the observations. Based on this, you hoped to achieve herd immunity by vaccination — and you failed in that as well.”

The senior immunologist further lambasted the Israeli government over “ignoring the fact that the disease is dozens of times more dangerous for risk groups and older adults, than for young people who are not in risk groups, despite the knowledge that came from China as early as 2020.”

Simultaneously, officials never established an adequate mechanism to evaluate the negative effects of immunization – which unequally affect younger individuals – whilst denouncing the doctors who documented vaccine injuries, according to Qimron. “Doctors avoid linking side effects to the vaccine, lest you persecute them as you did with some of their colleagues,” he accused.

According to Stanford University researcher Dr. John Ioannidis, younger folks incur minimal likelihood of mortality or major disease from COVID-19, with a survival rate of no less than 99.9 percent for anyone below 40.

According to research, immunizations essentially inflict more harm than that of the virus on its own in younger demographics. According to a study released last month by British researchers, the jabs dramatically raise the chance of potentially life-threatening heart inflammation in males under 40 years old compared to COVID-19 and may lead in more lethal types of the heart ailment.

“You have ignored many reports of changes in menstrual intensity and menstrual cycle times,” Qimron noted in his letter to the health ministry. “You hid data that allows for objective and proper research. Instead, you chose to publish non-objective articles together with senior Pfizer executives on the effectiveness and safety of vaccines.”

Public health professionals, on the other hand, “have also ignored the fact that in the end the truth will be revealed,” according to the professor. “And it begins to be revealed.”

“The truth is that you have brought the public’s trust in you to an unprecedented low, and you have eroded your status as a source of authority,” he alleged, citing increased incidences of mental illness and misbehavior among Israeli pupils amid COVID regulations.

“You have destroyed the education of our children and their future,” said Qimron. “You made children feel guilty, scared, smoke, drink, get addicted, drop out, and quarrel, as school principals around the country attest. You have harmed livelihoods, the economy, human rights, mental health and physical health.”