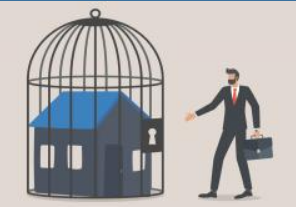 Over a year ago, the covid panic shook the world. We were told it would only be “15 days to flatten the curve” as businesses were locked down, “nonessential” employees were forced out of work (I’ve written about the myth of the nonessential employee here), masks were mandated, and individuals were not allowed to gather in groups or attend religious services.

In typical fashion, a government-mandated “temporary” usurpation of liberty turned into an indefinite infringement, as shown by the fact that we’re still under covid orders four hundred days later. Regardless of the length of time, the question remains that few have asked: What authority does the government have to lock us down and force us out of work?

This brings us to the issue of due process, which at minimum requires the right to appear in front of a judge and represent oneself to a jury of his peers before being stripped of essential liberty. Did the thousands of businesses closed and millions put out of work get this opportunity? Of course not. They were unilaterally stripped of their ability to put food on the table and pay their bills without any opportunity to object.

The concept of “quarantine” has been well established in American jurisprudence for well over one hundred years. When an individual is sick, and at risk of infecting others, the individual could be put in quarantine or isolation by a court until they are no longer infectious. Quarantine still requires basic due process. The individual subject to potential quarantine is still entitled to a court proceeding and evidence must be established of the individual’s risk to public health.

The past year has placed the entirety of the United States in de facto quarantine under the perceived threat of spreading covid. While quarantine is for the sick, most of those subject to the long list of restrictions have been healthy. Not a single person affected has had the opportunity to get in court and object. These blanket measures have denied every single citizen the constitutional right to due process they supposedly possess. Deemed sick until proven healthy, unfortunately, no one has had the opportunity to even prove their health. Governments have argued that “stay-at-home” orders are not quarantine as a way to end-run the issue. If that is the case, where do they get their authority? Neither the US Constitution nor that of any of the states provides an exception to due process in the case of a pandemic. Many states have relied on ambiguous statutes meant for use in a foreign invasion to justify these actions, but anyone who looks at the scenario objectively can see that there are no “pandemic exceptions” to due process of law. These powers were made up out of thin air, with absolutely no authority to grant itself this power.